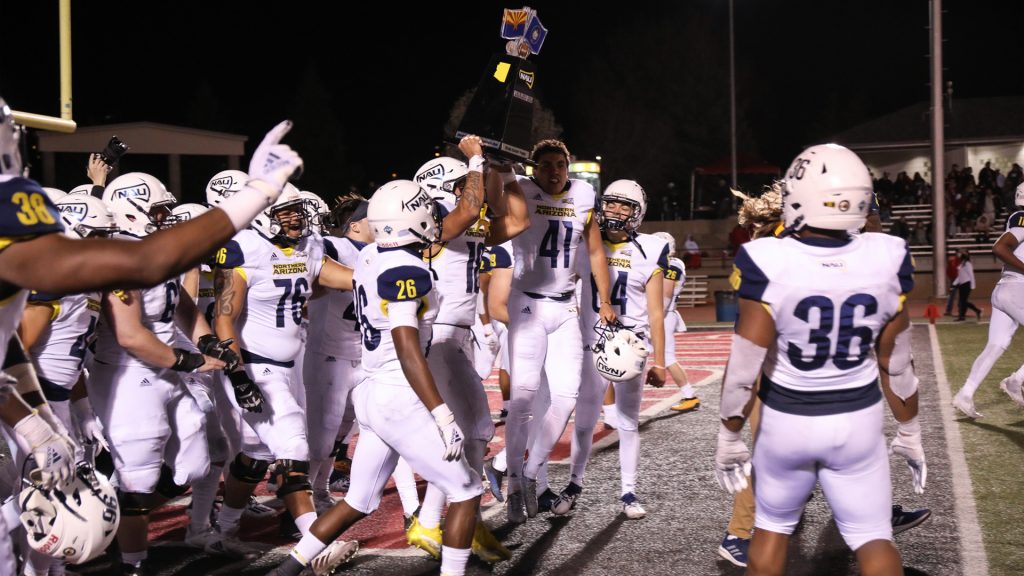 The NAU Lumberjacks got down 14-0 in the first half and reeled off 28 unanswered points to beat Southern Utah, 28-20, Saturday in Cedar City, Utah to complete the sweep of the Thunderbirds and retain the Grand Canyon Trophy.  The loss snaps the Lumberjacks’ 12 game road losing streak that dates back to September of […]

Keondre Wudtee found Coleman Owen with no time left as the NAU Lumberjacks beat the Southern Utah Thunderbirds, 34-33, in the season opener in the Skydome. Wudtee was 17-of-25 for 252 yards and two touchdowns in his first start as an NAU quarterback. After having 75 yards of total offense in the first half, NAU […]

The NAU Lumberjacks fought hard against Southern Utah Wednesday, but they couldn’t get over the hump as they fell to the Thunderbirds, 85-80 in Cedar City. Cameron Shelton was back to his normal scoring ways, leading the Jacks with 25 points, nine assists and seven rebounds. Nick Mains had 15 of his 18 points in […]

The NAU men’s and women’s basketball teams were winners Thursday night against Southern Utah. Cameron Shelton hit a pair of free throws with four-seconds to play as the men’s team rallied from eleven points down to get a big win on the road over the Thunderbirds, 75-72. Bernie Andre had a season-high 19 points and […]

NAU was stopped on fourth and goal from the one yard line with eight minutes left in the fourth quarter as Southern Utah beat the Lumberjacks 31-30 in the Grand Canyon Trophy game in Cedar City, Utah Saturday. Case Cookus was 32-for-44 for 325 yards and a touchdown in his last road game as a […]

NAU Beats Southern Utah In Overtime Monday In The Skydome

Ted McCree stole the ball away from Southern Utah’s Dre Marin with under ten seconds to play in overtime as NAU beat the Thunderbirds, 80-77, in the Skydome Monday afternoon. Bernie Andre led the Jacks with 19 points and eight rebounds and Carlos Hines added 17 points in the win, snapping a six game losing […]