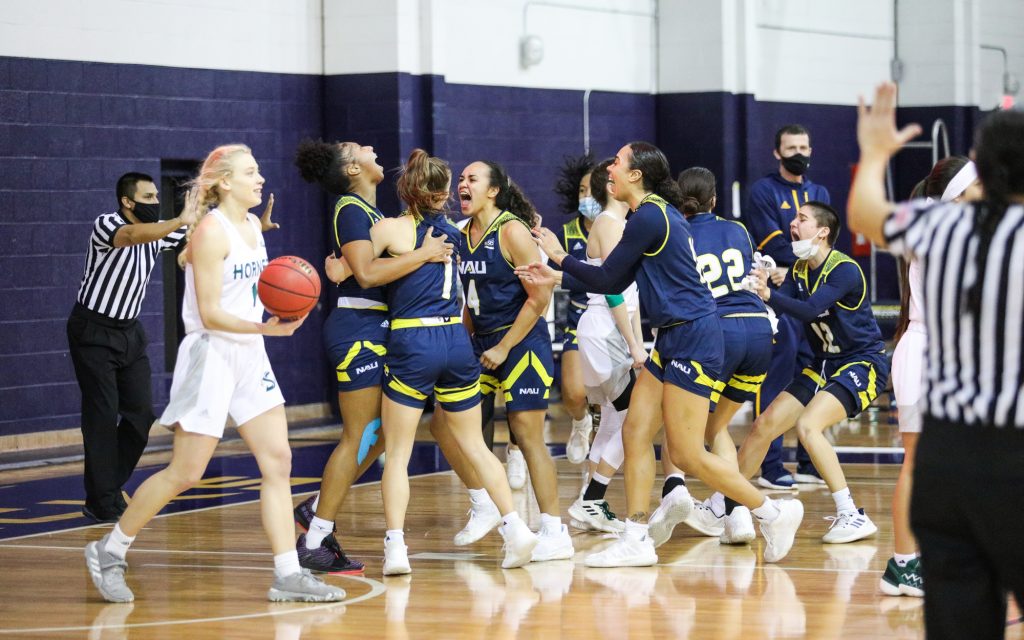 When NAU needed a basket to win the game, they looked to the Big Sky Preseason MVP Khiarica Rasheed. She hit a buzzer-beating layup as the Jacks beat Sacramento State 76-75 Saturday. Rasheed had a double-double, with 20 points and 12 rebounds, to lead the Lumberjacks, who swept the Hornets in the series and have […]

Regan Schenck had 13 points, 11 rebounds and 12 assists to lead the NAU Lumberjacks to a 75-51 win over Sacramento State at the Rolle Activity Center Thursday night. Scheck’s triple-double was the first, non overtime, triple-double in NAU women’s basketball history. Emily Rodabaugh and Khiarica Rasheed each scored 17 points and Rasheed also pulled […]

NAU trailed Sacramento State by 20 at halftime and rallied to within five points, but it wasn’t enough as the Lumberjacks fell to the Hornets, 64-57. Brooks Debisschop led the Jacks with 15 points and Cameron Satterwhite added 12 in the loss. Cameron Shelton chipped in with 10 points for NAU. Josh Patton led all […]

What a game it was in the Skydome Thursday night as the NAU women’s basketball team beat Sacramento State, in double overtime, 114-107. Nina Radford led the Jacks with 29 points, Khiarica Rasheed added 19 points and 14 rebound and Caitlin Malvar had the first triple-double in NAU women’s basketball history with 17 points, 11 […]

NAU Rallies From 18 Down, But Lose At The Buzzer To Sacramento State

The NAU men’s basketball team was down by 18 in the first half, only to rally and take the lead in the second half, but Joshua Patton hit a shot with five-tenths of a second left as Sacramento State beats the Lumberjacks 66-64 Thursday in the Skydome. NAU had four players in double-figures, with Ted […]