There will be several prescribed burns in the Coconino National Forest this week, one will be close to Flagstaff. Fire managers say they will perform a maintenance burn around 135 acres from Tuesday through Friday just east of the Naval Observatory. Smoke is predicted to move to the east, however there is a chance it […]

Fire managers with the Coconino National Forest have scheduled a few prescribed burns this week. More burns are set for the Peaks Project possibly Monday and Tuesday. The area is 15 miles north of Flagstaff just northeast of the San Francisco Peaks. Burns are also set for the same time about three miles east of […]

Coconino National Forest fire managers have tentatively scheduled a number of prescribed burns for this week. On Monday, nearly 11-hundred acres are set to burn in two areas about 31 miles south of Flagstaff, just south of Mormon Lake Village. On Monday or Tuesday a thousand acres is set to be treated on the Mogollon […]

The Coconino National Forest has set tentative plans for a series of prescribed burns this week. Fire officials cancelled a 302 acres that was is set to burn near the Fort Valley Trailhead eight miles northwest of Flagstaff Monday. A large burn is set to start Tuesday and last through Thursday about three miles northeast […]

Gravel Pit Near Mormon Lake Closed Temporarily Due To Blasting 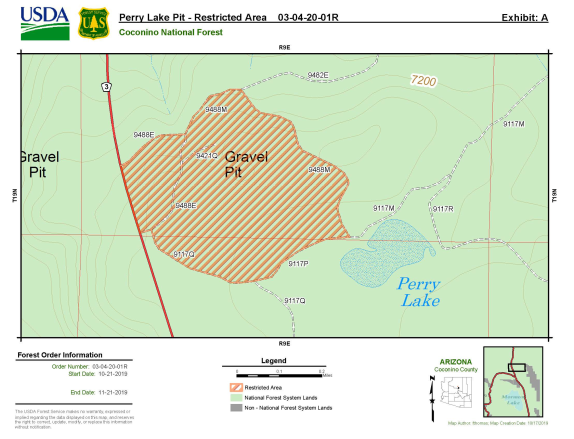 A gravel pit north of Mormon Lake will be temporarily closed due to blasting in the area. Coconino National Forest officials say contractors began blasting today near Perry Lake to collect rocks for construction material. The blasting will allow for the rocks and boulders to be crushed and used for future road construction projects. The […]

Fire managers on the Coconino National Forest will be back to work Thursday on a prescribed burn 15 miles southeast of Flagstaff just north of Mormon Lake. Officials say 919 acres will burn to protect the Pine Grove campground and Lake Mary Road corridor. Smoke will be thicker and more noticeable due to the amount […]

North Entrance To Mormon Lake Closed For The Next Few Weeks

The north entrance to Mormon Lake will be closed for the next several weeks for repairs. Coconino County officials say the closure is needed to repair a cattleguard on Mormon Lake Road. During the closure, all visitors will need to access Mormon Lake from the south entrance. The repair will take place about a half […]

There’s a pair of prescribed burns this week on the Coconino National Forest. Around 18-hundred acres is set to burn starting Tuesday around two miles southwest of Stoneman Lake. Smoke will be seen in the area. A pile burn is set for eleven miles southeast of Mormon Lake Wednesday and Thursday. Around 300 acres of […]

The north entrance to Mormon Lake will be closed for a couple of days this week. Coconino County officials say the entrance will be closed Tuesday through Thursday to replace the cattle-guard just north of Rockledge Road. The replacement is a preconstruction job for a bigger project set to break ground this summer at the […]

Lake Mary Road has reopened at Mormon Lake south of Flagstaff. Coconino County officials say public work crews have cleared off a seven-mile stretch of the road and reopened it at noon Thursday. The road was closed last Wednesday ahead of the record-setting winter storm that dumped over three feet of snow in the area […]