Coconino County Sheriff’s Deputies are still looking for a man who fled on foot from a DPS traffic stop on I-40 in the area of Cosnino Road Friday. The man was last seen running south of the I-40 in the National Forest area near Wapiti and Cosnino Road. Deputies were able to track the man […]

Campers, CCSO Deputy Credited With Saving The Life Of A Woman After A UTV Accident

Campers and a Coconino County Sheriff’s deputy are being credited with saving the life of a person involved in a UTV rollover accident over Labor Day weekend near Clints Well. The accident happened last Saturday at around 1:30 p.m. when campers and Deputy Andrew Luna responded immediately as the accident happened right in front of […]

Coconino County Sheriff’s deputies were busy over the Fourth of July weekend. Officials say deputies responded to over 12-hundred calls for service, including both citizen initiated and officer initiated activities. Most of the calls came on forest and community patrols. Deputies responded to 452 of those calls. Deputies conducted 133 traffic stops, which resulted in […]

Search Is On For A Missing Teenage Girl Near Williams 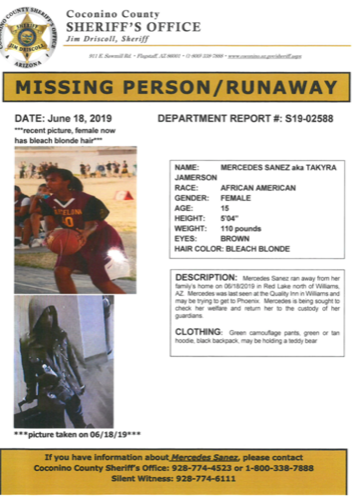 Coconino County Sheriff’s officials are looking for a teenage girl who left her family’s home in Red Lake, north of Williams Tuesday. Officials say 15-year-old Mercedes Sanez, also known as Takyra, was last seen at the Quality Inn in Williams and may be trying to get to Phoenix. She is being sought to check her […]

Coconino County Sheriff’s deputies were called to a home in Ashfork on a report of shots fired in the area of Randall Boulevard. Officials say several people reported hearing multiple shots, possibly fired from two different weapons on Thursday night at around 10:56 p.m. Authorities say 68-year-old William Barentine was in the area and was […]

It’s was a busy week for members of the Coconino County Sheriff’s Office and Rescue Unit after conducting seven operations over three days from Saturday through Monday. Crews tended to rescue calls near Sedona, on the San Francisco Peaks, a lost boy and injured hiker in Forest Lakes and an injured hiker in Sycamore Canyon, […]

One Person Dead After A Domestic Violence Situation In Doney Park

A domestic violence situation turned deadly Thursday morning in Doney Park. Coconino County Sheriff’s officials say the incident took place at around 7 a.m., reportedly in the Gemini Drive area. When deputies arrived they located 35-year-old Crystal Morgan with several stab wounds. Medical personnel attended to her, but she was pronounced dead at the scene. […]